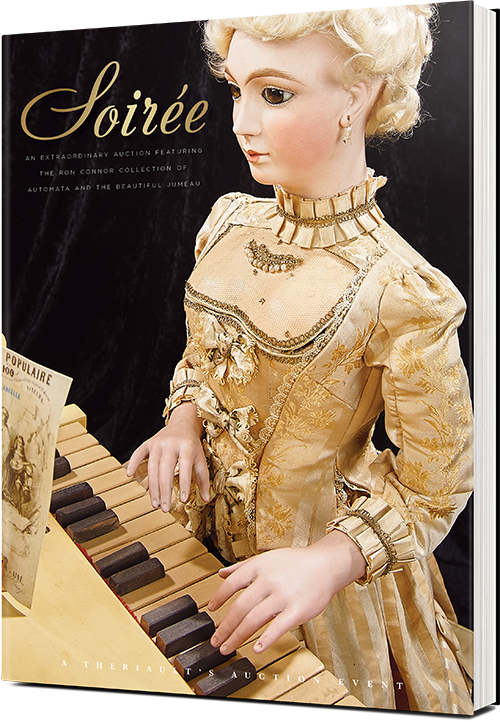 Theriault's antique doll auction in Las Vegas on May 14 was titled "Soirée", a play on the French word for an evening gala and a nod toward the extraordinary musical automata that were featured. But the auction was actually an entire day of auction treasures that had fascinated bidders eagerly competing the entire time. Highlighted was the estate collection of Ron and Mary Ellen Connors of Rogers, Arkansas, whose interests had clustered around musical automata, music boxes, and the glorious 19th century bisque bébés of Emile Jumeau.
Automata and Jumeau came together in many of the most important pieces, notably a grand-sized automata by Gustav Vichy known as "Bébé Triste with Toy Theatre and Pup in Basket". Vichy's use of the rare "triste" model by Jumeau was a clue to the luxury quality of the piece, which featured a tumbling acrobat in the theatre, a pup with waving paw in the basket, and a bisque child delighted by all the toy treasures she was holding. A splendid 30" tall, no other example is known to exist, she sold for $44,800. Other automata included Vichy's "Organ Grinder with Dancing Doll" topping at $22,000, Lambert's "The Spanish Mandolin Player" at $20,100, a "Troubadour Playing the Mandolin" by Roullet et Decamps for $8700, and Lambert's "The Ballerina" for $11,500; 25 musical automata, in all, were sold to enthusiastic bidders.
Among the beautiful dolls of Emile Jumeau that were presented at the auction were the very rare E.J.A. which was made by the firm for one or two years only, circa 1879; it soared to $34,700. A very rare size 20 Bébé Jumeau, the largest model made and likely for exhibition purposes only, topped at $33,400, selling to a private collector who had bid against Mr. Connor some 15 years ago when the doll was originally presented at a Theriault auction. "I've dreamt about for this doll forever, it seems", she said, joyfully. Other rare Jumeau bébés include a lady-bodied tete model with her original elaborate Spanish costume and wooden shipping box, topping at $10,000; a tete model in outstanding original couturier Asian costume and headdress at $9000; a gorgeous and all-original Bébé Jumeau, size 16, with original chemise, wig and box at $15,000, a "Paris Bébé" at $7700, and a tiny 8" bébé with rare "F" markings at $6000. More than 50 gorgeous examples of the Jumeau dolls were presented at the auction, with prices especially strong.
The auction also featured the collection of the late Carolyn Guise of Dayton Ohio. During the heyday of her collecting years, Mrs. Guise lived near Pawtucket, Rhode Island, the hometown of the revered American cloth dolls by Martha Chase. The seeking and acquisition of rare Chase dolls became a preoccupation of the discerning collector, whose collection included nearly two dozen examples, each different. Especially notable was a brown-haired lady with rare double chignons, presented in her original box, which sold for $4800; another brown-haired lady with rare double spit curls at the sides of her forehead went to $3900, "Little Nell" lady topped at $1700, while another brown-haired lady with classic chignon and original box realized $1900. A large black cloth "Mammy" doll sold for $5500, while a rarer 12" black-complexioned child was $6000. The bald-headed gentleman known as "Mr. Micawber" topped at $5200, while a younger handsome lad with stylish side-parted hair soared to $7000. All prices reflect the 12% buyer's premium.
Theriault’s Marquis cataloged doll auctions are considered "events" in the doll world, featuring museum-quality displays, pre-auction lectures by noted authorities, and even the signature hot fudge sundae breaks. For those who cannot attend, absentee bidding is encouraged, including written bids, live telephone bidding, and live internet bidding. The next Marquis antique doll auction is scheduled for Tuesday, July 26 in Washington D.C. at The Mayflower Hotel, highlighted by the world class collection of Ursula Brecht whose extraordinary dolls were featured in the 1987 book "Precious Bébés". For more information visit www.theriaults.com.
CAPTIONS
#17. The superb French musical automaton was notable for its grand 30” size, its extremely rare Bébé Triste facial model, its intricate movements including tumbling acrobat in the toy theatre and hidden pup with waving paw in the basket revealed when the lid was lifted. It sold for $44,800 at Theriault’s May 14 auction.
Martha Chase dolls. A selection of rare examples of the cloth dolls of Martha Chase featured at Theriault’s auction on May 14.
Jumeau dolls. The Theriault’s auction featured the Connor collection, highlighted by the magnificent bébés of Emile Jumeau, a selection of which is shown here, and including a wide variety of models and sizes, from tiniest 8” to the grand 42” size 20 bébé, likely made for exhibition purposes only.
DOWNLOAD PRESS RELEASE AND IMAGES FROM DROPBOX