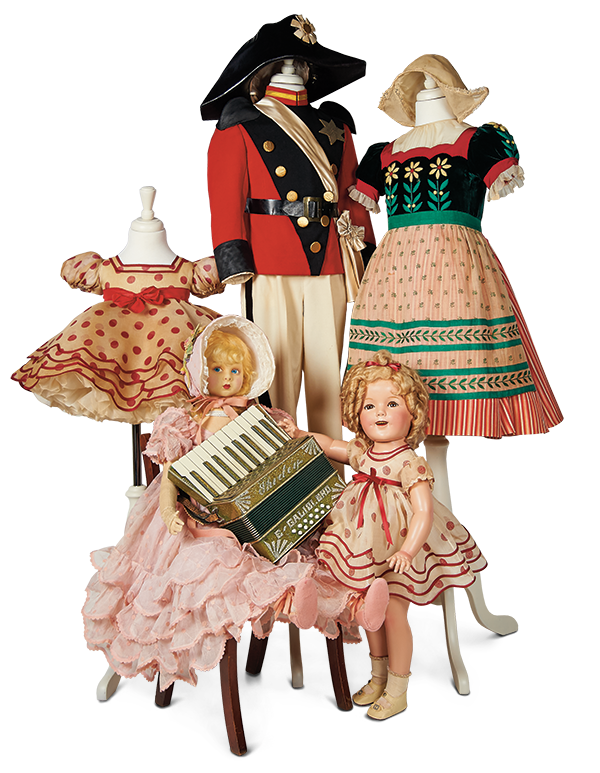 At Theriault's July 14 auction "Love, Shirley Temple" featuring nearly 600 costumes, memorabilia and dolls from her personal archives, things "sparkled" for the 13 hours the auction lasted. "Sparkle" was the word that Shirley Temple's mother, Gertrude, used to encourage the youngster whenever she was about to be filmed, and the word seemed especially appropriate at the auction, too, as it was Gertrude who had the foresight to begin the preservation of these objects back when Shirley was a mere 5 years old.
Thousands of persons worldwide came to the auction, bid absentee or bid live on the internet via Proxibid, who provided a live streaming view of the entire auction. The gala event was accented throughout the day by whoops of joy and sobs of happiness as attendees cheered on their fellow attendees - even if they had competed for - and lost - the same object. The family of Shirley Temple Black watched from the gallery throughout the entire day, noting that this celebration of her positive attitude and optimism is exactly what she had wanted, as the memorabilia of her young career, 1930-1940, sped on its way around the world, just as her films had done.
Some objects, actually, sped not so far. Her 1928 birth certificate from the Santa Monica Hospital (estimate $300+) soared to $5500 and will be returning to its hometown of Santa Monica. The iconic red and white polka dot dress, worn in her 1934 break-out role "Stand Up and Cheer", danced its way to $75,000 ($20,000+ estimate) and will now make its home in the Santa Monica History Museum, hometown of the young star, as will the red plaid "Good Ship Lollipop" dress from "Bright Eyes" (estimate $3000+, selling at $21,000). A costume worn by Shirley Temple in the 1936 film "Stowaway" was won by a private donor for the Museum of Fine Arts in Boston. Other costumes will be exhibited by film memorabilia sponsors in Australia and Norway. In other museum notes, the Smithsonian has been gifted Shirley Temple's student typewriter, won at the auction by Steve Soboroff, noted Los Angeles collector of celebrity-used typewriters, who made the generous bequest (estimate $300, hammer price $4500). And the UFDC Museum in Kansas City will own the 13" doll of Shirley Temple in her Texas Centennial costume, (estimate $1000, hammer price $4500) gifted by Julie Blewis, doll collector and benefactor. The 27" Shirley Temple doll in Texas Centennial costume (estimate $1000, hammer price $8500), sold to a private Texas collector, and will make its eventual home at the Dallas Historical Society.
The auction began with a record price, $11,500 (pre-sale estimate $1000) for Shirley Temple's Raggedy Ann play doll, and continued that way for thirteen hours, until the final lot, Shirley Temple's hand-drawn childhood sketch "Heaven Looking Upon Earth" which fetched $5000 (pre-sale estimate $300). Her iconic tap shoes, worn during tap dances with Bill "Bojangles" Robinson, topped at $25,000 (pre-sale estimate $1500) and will make their home in an important South Dakota film collection alongside the famous Lenci doll known as "Pinkie"; the doll appeared in a rivalry scene between young Shirley Temple and Jane Withers in the 1934 film "Bright Eyes" (pre-sale estimate $2000, hammer price $14,000). Shirley Temple's baby grand Steinway piano, gifted to her and inscribed by the Steinway family, sold at $45,000 (pre-sale estimate $30,000), to a private Illinois collector who also took home nine Raggedy Ann books with amusing inscriptions to Shirley from Johnny Gruelle (pre-sale estimate $3000, hammer price $12,500), and a Shirley Temple doll in unique Fox Studio-made costume that replicated the actual costume she wore in the film (pre-sale estimate $1000, hammer price $19,000).
A 356-page hardbound book was prepared for the auction, photographing and describing each of the objects, all of which had remained in the Shirley Temple family from their origin until this auction. Many objects included a photograph of Shirley with the object, and her personal reminiscences of it. Stuart Holbrook, President of Theriault's had earlier noted, "This collection was unique in its scope and having been in the hands of the original family - first Gertrude Temple, then Shirley Temple Black, and finally her son and daughter - until this moment. The catalog is a tangible memento of the collection and of this remarkable young life."
Sponsored by Theriault's, the collection titled "Love, Shirley Temple" toured museums around the United States for two months prior to its auction. The auction, conducted on July 14, was followed by an auction of antique dolls on July 15, both events conducted at The Little Theatre in Kansas City. The two days of auctions totaled over $4.2 million, a new record for the Annapolis, Maryland-based firm, Theriault's, which for 45 years has specialized in the auction and appraisal of childhood memorabilia. Complete auctions and results can be viewed at www.theriaults.com. The 356-page book "Love, Shirley Temple" can be ordered online or by calling 800-638-0422.