"For the Love of the Ladies" at Theriault's October Auction
Annapolis, MD -- October 6, 2016 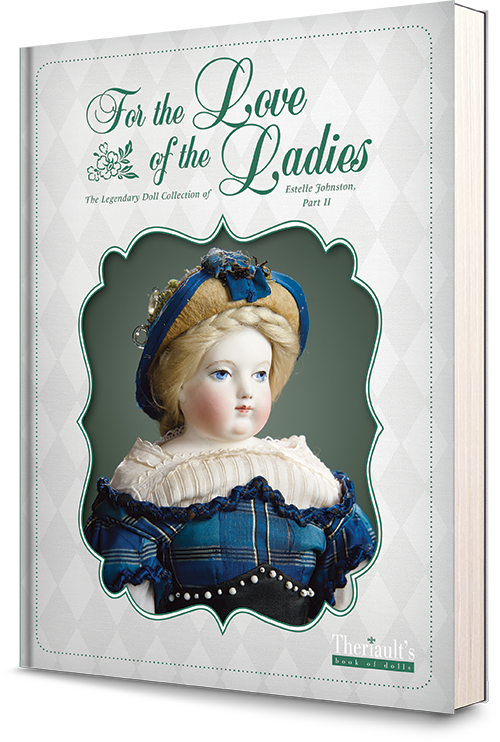 When Estelle Johnston began seeking early 18th/19th century wooden dolls in the 1960s, there were few collectors to keep her company. Serious doll collecting was in its infancy, and few journals or books were available to budding collectors. She was pretty much on her own.
Yet a half century of doll collecting later, it is obvious that the rest of collectors have caught up. At Theriault's October 1 and 2 auction of her important collection of early wooden and paper mache dolls, prices sky-rocketed, with interest from around the world. There were hints as to the desirability of these early dolls prior to the auction as a record number of catalogs were sold, and collectors called eagerly with knowledgeable questions, vying to reserve telephone lines for live bidding.
The excitement began within the first 10 minutes of the Theriault’s auction as lot #4, an early 15" Grodnertal wooden doll with original costume soared to $18,000 (presale $7500/9500), followed by lot #5, a grand-sized Grodnertal lady with painted bodice that rushed to $19,000, twice its high presale estimate. Keeping right in step was the next lot, #6, a 28" English wooden doll in original costume with coin pocket dated 1739 which topped at $44,000 (presale $12,000/18,000) leaving at least one under-bidder in tears.
Enthusiasm continued unabated over the two days of the auction. An 18th century Venetian court doll in historical costume was $10,000 (presale $5500/7500), an early Continental cage-skirt doll with exceptional sculpting was $6750, more than doubling its presale estimate, and a petite 12" wooden lady with carved ringlet curled hair topped by a gold diadem more than tripled its high presale estimate, topping at $12,000. A highly characterized lady doll, with attached provenance note suggesting that the doll was meant to represent the French author Georges Sands, climbed quickly to $10,000 (presale $4000/6500), an 18th century lady, only 15", which had been featured in a doll book, Rare and Lovely Dolls of Two Centuries, described as "vibrantly alive" and with a body that was "most sensitively realized, with the most curious bend at the waist" literally flew to $30,000, quadrupling its high presale estimate; and the tiniest of classic English wooden doll, only 5", in original costume and storage box, moved without hesitation to $12,000, more than four times its high pre-sale estimate.
Early wooden dolls were only a small portion of this important collection. Estelle Johnston had sought the esoteric and unique in all categories of antique childhood objects. The collection included such rarities as early mica overlay dolls, known as "metamorphose" and considered the earliest forms of "paper dolls". Two rare sets soared to $5000 each, tripling their pre-sale value. A German porcelain doll (the auction presented dozens of very rare examples) by KPM in original Scottish costume topped at $19,000 (pre-sale $3500/4500), a French bisque poupée with wooden body by Jumeau, costumed as a very dapper gentleman, was $11,000 (presale $4000/6500), and a French faience miniature desk, perfect for display with a 12" doll, topped at $3000 (presale $9000/1400). Intrigued by miniaturia, especially as it related to accessories for dolls, Estelle Johnston's collection included examples that seldom appear on today's market. Many were sold in small lots to appreciative collectors, while others appeared singly, notably the very rare tiny French porcelain de Paris bourdaloue, a thimble-sized, oval-shaped chamber pot legendarily named for Pere Louis Bourdaloue, a priest in the court of Louis XIV, whose sermons were said to be so long that ladies' maids attended them at services with this specially-shaped pot at the ready. Estimated at a generous $400/600, the bourdaloue soared to $3000.
More than 450 lots were sold at the auction, each presented in the luxury full-color catalog with intriguing historical information. Catalogs, with price keys, are available in limited supply from Theriault's by calling 800-638-0422 or visiting www.theriaults.com. To view the complete auction and results visit www.theriaults.com. Upcoming Theriault Marquis catalogued doll auctions include November 13, at the Westin Hotel in Annapolis, Maryland, featuring the collection of Mary Hamilton of New Jersey and others; and January 7, and 8, at the Westin Hotel in Newport Beach, CA featuring the private collection of Samy Odin as shown in his Musée de la Poupée in Paris, France.
CAPTIONS
Left: Standing a demure 15", the wooden Grodnertal doll with superb original costume including an embroidered coin pocket and an unusual woven bonnet designed to accommodate to her head shape, topped at $18,000, five times her high pre-sale estimate, at Theriault's auction of the Estelle Johnston collection.
Top right: The regal English wooden doll, whose embroidered hidden coin pocket dated her at 1739, was considered by Estelle Johnston as a signal treasure of her collection. Collectors agreed at Theriault's October 1 auction, as the doll soared to $44,000 (pre-sale estimate $12,000/18,000).
Bottom right: Gracing the cover of the Theriault catalog featuring the Estelle Johnston collection was this superb poupée by Adelaide Huret, enhanced by fine early original silk costume including parasol and leather shoes signed Huret. She sold for $28,000 (pre-sale estimate $9000/12,000).
DOWNLOAD PRESS RELEASE AND IMAGES FROM DROPBOX